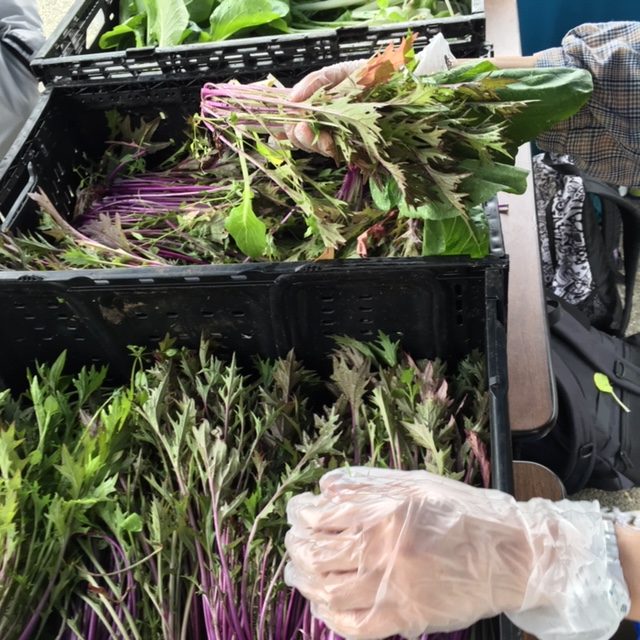 This blog has been borrowed from Harvest Against Hunger. The original, published May 6, 2020, can be found here.

When working in the hunger relief realm during a pandemic, the need to be flexible goes beyond changing scheduled in-person meetings to phone calls–it may even involve adding on whole new projects with new partners! Less than one month into Harvest VISTA Maddie’s service term, COVID-19 arrived in Seattle. As the destructive potential of the disease became clear, the adaptations made on the city, county, and ultimately state-wide level to mitigate the virus’s spread resulted in drastic changes at all steps of getting food from field to fork. As one local farm that participated in the King County Farmers Share last year reported in late March:

“Restaurants accounted for ~60% of our sales last year. We expect that sales channel to disappear. We can make up for it by growing our CSA, but that leads to other challenges. We don’t think we can recoup all of our lost revenue through growing our CSA alone.”

In addition, while Washington’s state-wide “Stay at Home” order, enacted on March 24, declared farmers markets as “essential services,” the City of Seattle government decided to close the city’s farmers markets, including the three locations typically open year-round. However, at the same time, since King County was the nation’s first site of school and workplace closures in response to the virus, the rise in food insecurity due to schools and workplaces closing has been significant and ongoing. As one KCFS agency described:

“Our supply right now for produce and fresh items is down about 50%, while the demand for food is up 30-40% just last week. We suspect this number to increase as we see more unemployment and food insecurity.”

Fortunately, despite all the changes to “normal” activities, working from home does not diminish a Harvest VISTA’s role as a convenor, facilitator, and advocate. At the same time KCFS’s participants were reporting an array of challenges to their usual operations, new opportunities emerged. Seattle Neighborhood Farmers Markets (NFM) recently partnered with the Food Bank Program of PCC Community Markets, a regional grocery co-op, who diverted funds from their bulk buy program to support their 15 partner food banks around King and south Snohomish Counties to purchase fresh fruit and vegetables from local farmers impacted by farmers market closures. NFM reached out to the Washington Farm to Food Pantry Initiative seeking guidance on coordinating farm-to-food bank relationships–this being a new area for both organizations–through which they were then connected to HAH and the VISTA’s work with KCFS.

After a number of planning conversations, the cross-organizational team decided to carry out distributing the funds through “CSA-style” contracts, an approach which some KCFS agencies used last year. This blend uses an upfront payment of a pre-harvest contract as a lump sum to order off a farm’s wholesale “fresh sheets” of whatever produce is available each week–allowing flexibility for both sides throughout the season. With the combination of NFM’s close relationships with farmers, PCC’s broad support base, and HAH’s years of experience coordinating farm-to-food bank networks, VISTA Maddie felt well-positioned to take up much of the back-end contracting and record-keeping in administering this important initiative. What’s more, some of the local farms and food banks were already familiar with farm-to-food bank processes from participating in KCFS last year.

Already, the partnership has contracted out over $40,000 between food banks and farms, with a few deliveries already made of spring harvest favorites like asparagus! And these farmers are already feeling the relief:

“Having money up front and being able to pay it off in produce throughout the season makes such a difference. It costs us tens of thousands of dollars to get the fields ready before the season even starts and having money to pay our taxes, prune our crops, and buy fertilizer now is huge. It feels good that people are getting fed and farmers are being able to survive and pay their bills.”

Ultimately, this collaboration addresses and exemplifies the need for diversified networks and networking to adapt to new cross-sector challenges like managing a pandemic. Leveraging existing social capital to share and consolidate resources and efforts provides the most efficient route to getting help to those who need it most. Creating more direct supply chains from new relationships between agencies that distribute emergency food and the farms that grow it will ultimately support long-term sustainability for programs like KCFS. Further, broadening the farm-to-food bank network, not just within King County but the greater Puget Sound region, will demonstrate the importance of robust localized food systems, hopefully garnering greater support from food and farming policy too as policymakers now reflect on how to ensure society’s basic needs are met in the face of widespread supply chain shocks into the future.

Maddie Price serves as a Harvest VISTA at Harvest Against Hunger (HAH) in Seattle, WA, coordinating the King County Farmers Share (KCFS) program, which is an expansion of the statewide Farm to Food Pantry program that HAH manages with the Washington State Department of Agriculture. Through a 2-year Regional Food System Grant from the King Conservation District, KCFS provides funding for hunger relief agencies in King County, WA, to purchase fruit and vegetables from small-scale farms also in King County. While 2020 is the second year of the grant, KCFS aims to establish robust, mutually-beneficial connections between local farms and food banks that sustain into the future to expand access to fresh whole produce for King County’s food insecure populations.